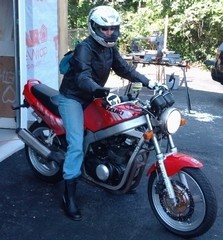 A starter bike for a few people, converted to race format for a little while, and back to street to be My First Motorcycle. I've promised not to drop her on the ground, as long as she doesn't throw me off her back.

July 2010, I was rear-ended on my way to work. No damage to me, Suzi was declared totaled. We bought her back and fixed her up. I found Giovanni shortly afterward, hubby rode Suzi around for a while longer.

July 2011, sold to one of my husband's racing buddies. Godspeed, Suzi.

Car and Driver magazine, whom I trust in many regards, have ... ...